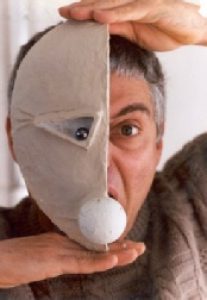 I collect experiences, images, situations from daily life, translating them into form. I took my ‘first steps in the arts’ as a jewelry design student at the Nova Scotia College of Art & Design, Halifax (1983-’85), and the Gerrit Rietveld Academy, Amsterdam (1985-’89). At the Rietveld Academy under the supervision of Onno Boekhoudt, I began to look at things from a somewhat broader perspective, and started to experiment, which led me to finding,developing my own language and way. When creating the work, I am relating to the human body as the ‘center’, emphasizing the mental, physical & movements, the space surrounding it, looking at restrictions that appear and taking them with me too.

I am using them, incorporating them, taking them all into the construction, trying to define and ‘extend’ the body space.

Then all elements are playing, influencing, drawing one another into one unit.

The human, is both ‘viewer & participant’ at same time on the one hand he is the center (participant) of the ‘unit’; on the other hand, he is also the viewer, looking on events…

I do not look at the works as belonging to any ‘one’ specific category or direction in the arts: for me it is, in the end, more about the search than about anything else.

Noam Ben-Jacov, unnameable and untamable
Noam Ben-Jacov determines his works as body-related objects. Kafka wrote about people who suffer because of their profession. The audience often pays for the privilege to watch the suffering in order to get purified through catharsis. Noam most probably must know this.His works contain that u n n a m e a b l e – that provides a kind of magical distance, mystery, nameless might, holiness.
I am staggered by Noam Ben-Jacov’s dynamic restlessness when he purposefully marches towards his destination in snowfall, wearing his sandals. Directly or indirectly.

The world can be understood in various ways. The metaphor of the lock and key is one possibility. If man’s tool is the key then every problem is the lock to him.

NBJ’s performances must be seen in reality. Not only because many of our perceptions fail to reach us from the screen, we subconsciously pick out the significant, much is lost in translation, much disappears in censure. In any case our nerves won’t shoot all at once. And since the body has a tendency to sabotage the attention of the mind by a deviation, whatever we receive from the screen is inevitably one-sided. Something essential might get lost – the crunch of the dancer’s feet on the floor, gusts of air of drawn breath, the echo of metal constructions clinging together …  We see, hear, smell and feel the ultra smell (the smell by which two squirrels recognise each other in the forest). We hear the silence after a porcelain vase has shattered.

Noam tears reality into throbbing pieces and fits it back together.

Art’s touchstone is its precision, said Ezra Pound.
The key of these moments is the tension between the form’s brilliant prison and freedom of depiction. An accord emerges, assembling of unexpected sounds, something new with the sound of its own. Stimulating one sense enhances others as well – synthesis, what else. It whips the senses, adds perceptions, so we could feel fully satisfied with the performance of life. To be mortal and charged with perceptions means both panic and – privilege. For those who have partaken in NBJ’s performances such a perception of swinging signifies an exalting privilege.

The letters that Noam sends to his friends are so special. They are like dance performances. There are hardly any sentences as such. Just a thought, then another – and a dotted line in between. I always read these letters as pantomime. A movement – and the accompanying aerial gap, a dotted line. Then the next movement, something rustles in the air. The picture runs in front of the eyes and in the ears.
Mystical non-material force of life.